Specialist ethical and islamic superannuation fund crescent wealth has today received recognition for its stance against nuclear weapons and their manufacturers and financiers.

The recognition comes from Quit Nukes, a joint initiative of the Nobel Peace Prize-winning International Campaign to Abolish Nuclear Weapons and the Medical Association for Prevention of War.

Quit Nukes today added Crescent Wealth to its Honour Roll of Australian financial institutions that have adopted and implemented policies to comprehensively prevent any financial involvement with companies that produce nuclear weapons and marked this with a ceremony at Crescent Wealth’s Sydney CBD office. The Honour Roll criteria includes a clear policy and zero exposure to a list of 25 companies that produce or maintain nuclear weapons.

Crescent Wealth Managing Director Talal Yassine OAM said, “It is way past the expiry date for super funds to continue to invest in the weapons industry. Crescent Wealth has taken a moral, ethical and investment stand on weapons. We never have and never will invest in companies involved in the manufacturing or financing chain of nuclear and other controversial weapons, including chemical and biological weapons, landmines and cluster munitions.  It is our obligation to create and contribute to a world free of such destructive harms,” he added.

Quit Nukes is working with Australian financial institutions to bring them into line with the UN Treaty on the Prohibition of Nuclear Weapons, which among other things prohibits assistance with the production of nuclear weapons, including financing.

Quit Nukes Director Gem Romuld said she applauded Crescent Wealth for its clear rejection of such abhorrent weapons. “The nuclear weapon ban treaty makes these weapons illegal from January 22 2021, as well as immoral, so getting out of the industry that produces them is more important than ever. Even though Australia hasn’t yet joined the treaty, financial institutions should move ahead with a zero-tolerance policy for nuclear arms producers, in line with international law and the increasing norms of ‘avoiding harm’ and responsible investment,” she said.

A growing number of parliamentarians, local councils, unions, and religious and civil society organisations are calling for Australia to join the treaty, including Federal member for Cowan, Western Australia, Dr Anne Aly MP.

“Australia, we need to support the treaty. We need to show courageous leadership and demonstrate to our youth that strength isn’t in these destructive weapons. We can no longer be a proxy to the devastation and threat nuclear weapons pose,” Dr Aly said. 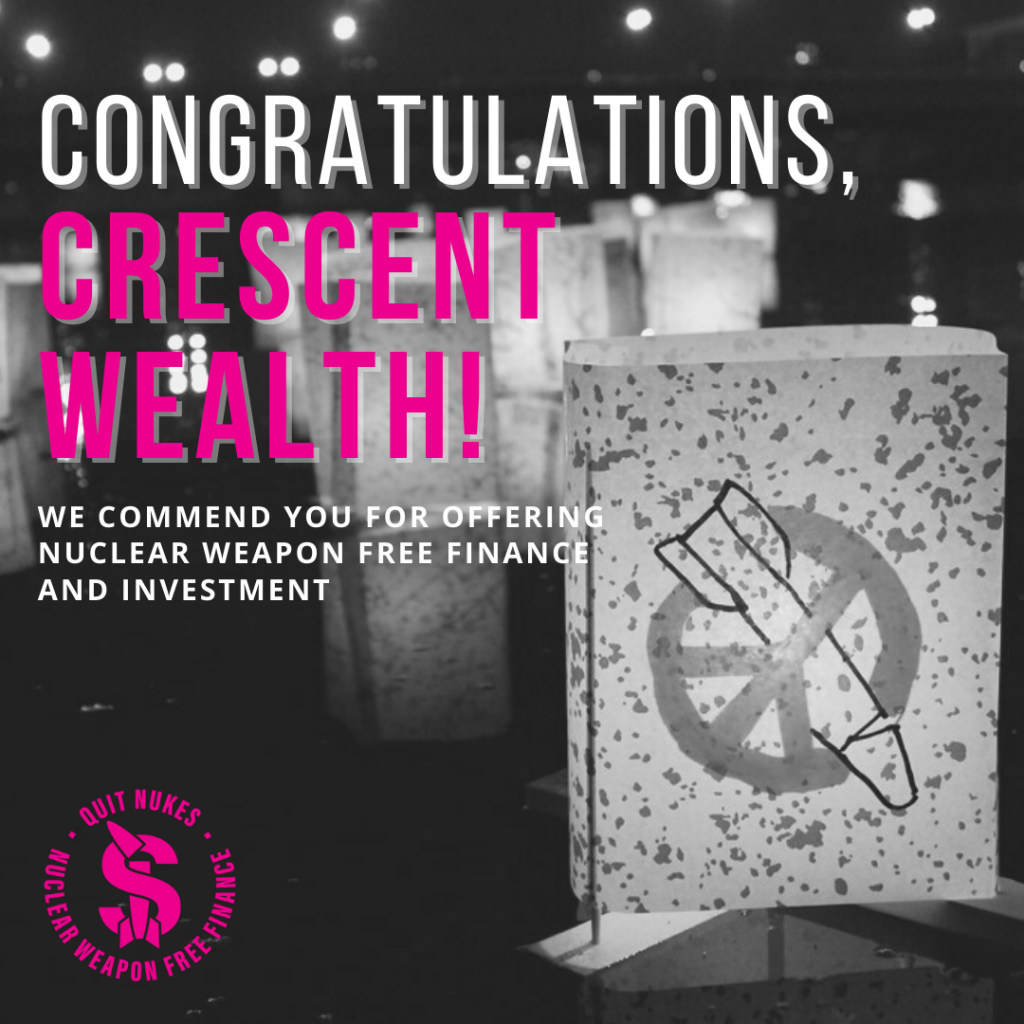